A couple years ago, my wife and I bought a house up in the Oakland hills that I love very much except for one thing: like so many California homes it has no air conditioner and isn’t really set up well to install central air conditioning. We’ve got by with a portable AC on wheels that hooks up to a window, and ceiling fans which are amazing and highly recommended (just buy a good one).

Where we live is a warm, dry climate, like something in between Mediterranean and desert. Pretty typical California stuff we’re talking about here. It gets hot and dry enough in some parts of the house ,like the greenhouse, outdoors, or in my office where there’s south-facing windows, for an evaporative cooler to be useful. I won’t bore everybody with a detailed description of how they work here. Suffice it to say they operate by cooling air by using the hot dry air to evaporate water, thus raising the air’s humidity and lowering its temperature. A win-win! If you’re interested in learning way too much about evaporative coolers, as expected there is a crazy-long article on Wikipedia about them.

I started doing a little research and found a handful of people on YouTube who had built their own DIY swamp coolers, so I’m far from the first person to come up with this idea. I took it on as a challenge to try to build a swamp cooler as cheaply as I could using stuff I already had.

I had some 1/2” tubing leftover from various hydroponics projects, some plumbing for same, a pump, and a fairly capable power drill. The only thing that I ended up having to order online for this build was the gigantic blue evaporative cooling pad I bought. I don’t know if I would do this again with the blue pad, though; it turned out to be incredibly messy as you’ll soon see.

I didn’t really deviate much from the kinds of designs that you see on YouTube. I used a 3” hole saw in my first iteration and cut holes all the way down to the bottom of a bucket, then cut a hole in the bottom of that bucket so it could sit on top of another bucket that would hold the reservoir of water. 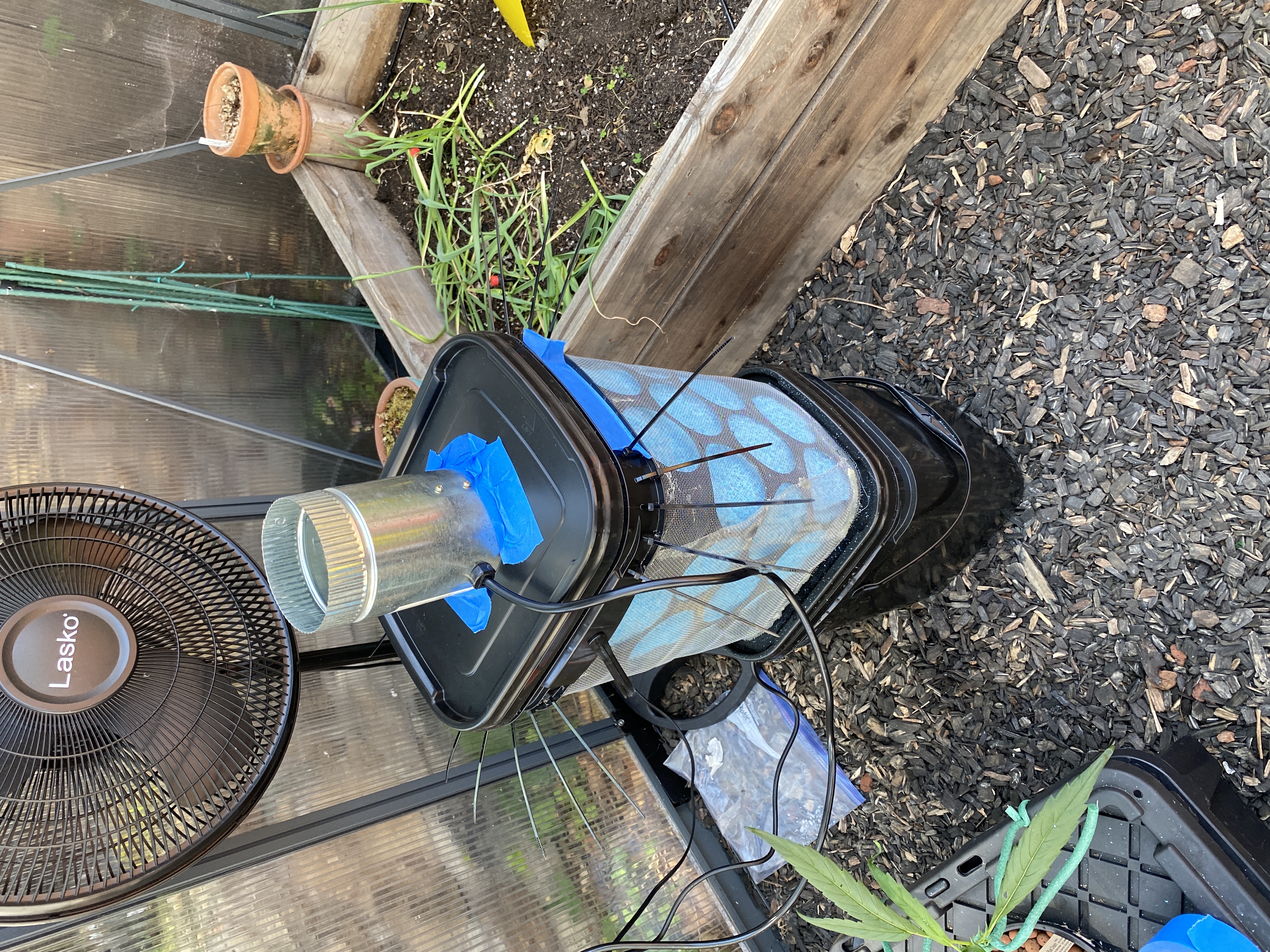 This turned out to be really difficult to pull off. The 3” hole saw was fine on flat parts of the bucket but veered a little off-course on the edges and sides, and the curved parts were very difficult to remove from the hole saw afterwards.

After a struggle getting the screen onto the bucket (why did I decide the screen belonged on the outside?), I was able to add some plumbing. The plumbing in Swamp Thing is a little complicated, with an extra valve off to the side that leads back into the reservoir. The reason for this is I hadn’t tested all this stuff together yet and thought maybe the pressure coming out of the pump might need adjustment. The pressure needed might be hard to calculate, since I was poking holes in the tubing with a thumbtack to make a drip ring.

To test Swamp Thing, I put it in the hottest place on our property: the greenhouse. I love my greenhouse during winter; during that time it is a warm and comforting retreat from the rainy weather outside, for me and the plants. During the hotter days of summer, it is a scorched hellscape that few plants can survive. On a hot day the temperature can get up to 120F in there, with relative humidity at an excruciating 15%. These are brutal conditions, but they are also conditions where an efficient swamp cooler can do a shockingly good job of cooling air.

For the initial test, I hooked up all the plumbing, ran it for several minutes to see if it worked. It did not. When I first turned on the pump, water shot out of every hole poked. It looked beautiful, keeping the cooling pad constantly hosed down. I ran the fan for a while. It was utterly ineffectual. I opened the swamp cooler back up: no water. I turned the pump off, poked some more holes, then ran it again. Same result: spraying like crazy then after a minute, bupkis. I figured out that the water pressure was building and causing the little tiny pinpricks the water was flowing through to close up.

Drilling 1.5mm holes into the drip ring turned out to be somewhat more consistent but still didn’t get the cooling pad sufficiently wet to really make evaporation happen efficiently. I also drilled way too many holes for the zip-ties that hold the drip ring in place. They’re totally necessary, as the drip ring can shift itself out of place very easily, but the minimum number required is many fewer than I used, we’ll just put it that way. You can get away with very few zip-ties.

I definitely noticed a few things during building and testing that I didn’t like, and already halfway through Swamp Thing I was planning what I was going to do differently with Son of Swamp Thing.

Even with all of these limitations, the cooler was marginally effective once I used a higher-flow fan. The fan pictured is a 100cu.ft./min duct fan, which would probably be okay if the rest of the cooler were airtight in the right places, but alas. The cooler was significantly more effective with a 250cu.ft./min beast on top of it, but that was loud and used up a much more expensive fan. Still, the air coming out of the swamp cooler was significantly cooler than the air coming in, which was pretty cool. I was able to cool air down from 118F to 93F and increase its relative humidity from 16% to 46%. The air coming out of the cooler was nice and refreshing, but unfortunately it didn’t do so nearly fast enough to cool down the greenhouse.

I had an idea for a follow-up: a compact swamp cooler made using the same principles, more neatly, that would be suitable for a small room indoors.

I was definitely gonna need some more hot glue…. 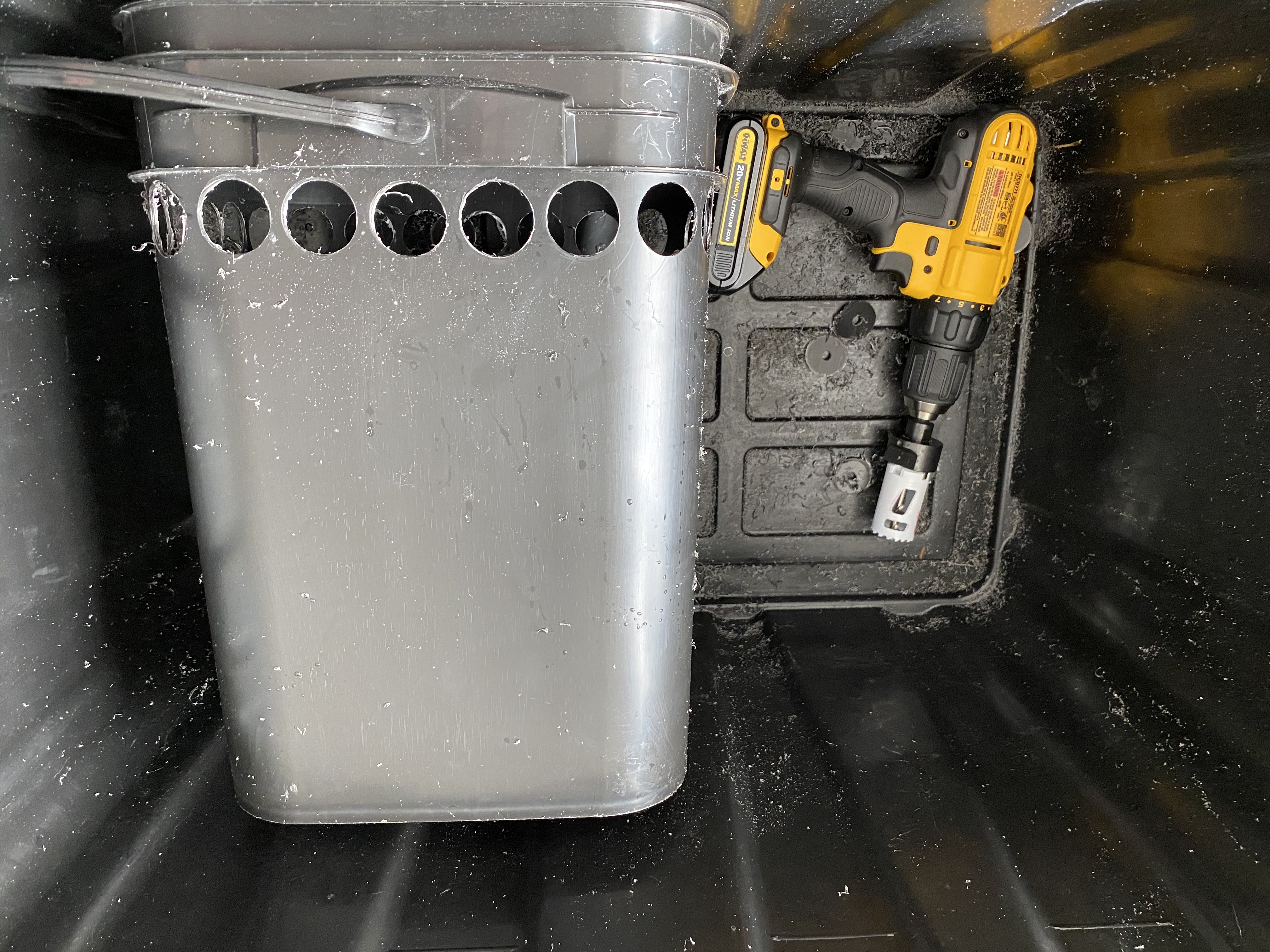 I found the 3” hole saw pretty unwieldy in the first build so I backed off to a 1 1/4”, which was a lot more nimble. In between, I also upgraded power drills. The smaller hole saw allowed me to be much neater about the hole drilling, but I still had some gaps.

After much more carefully applying the screen to the bucket, it looked pretty good! 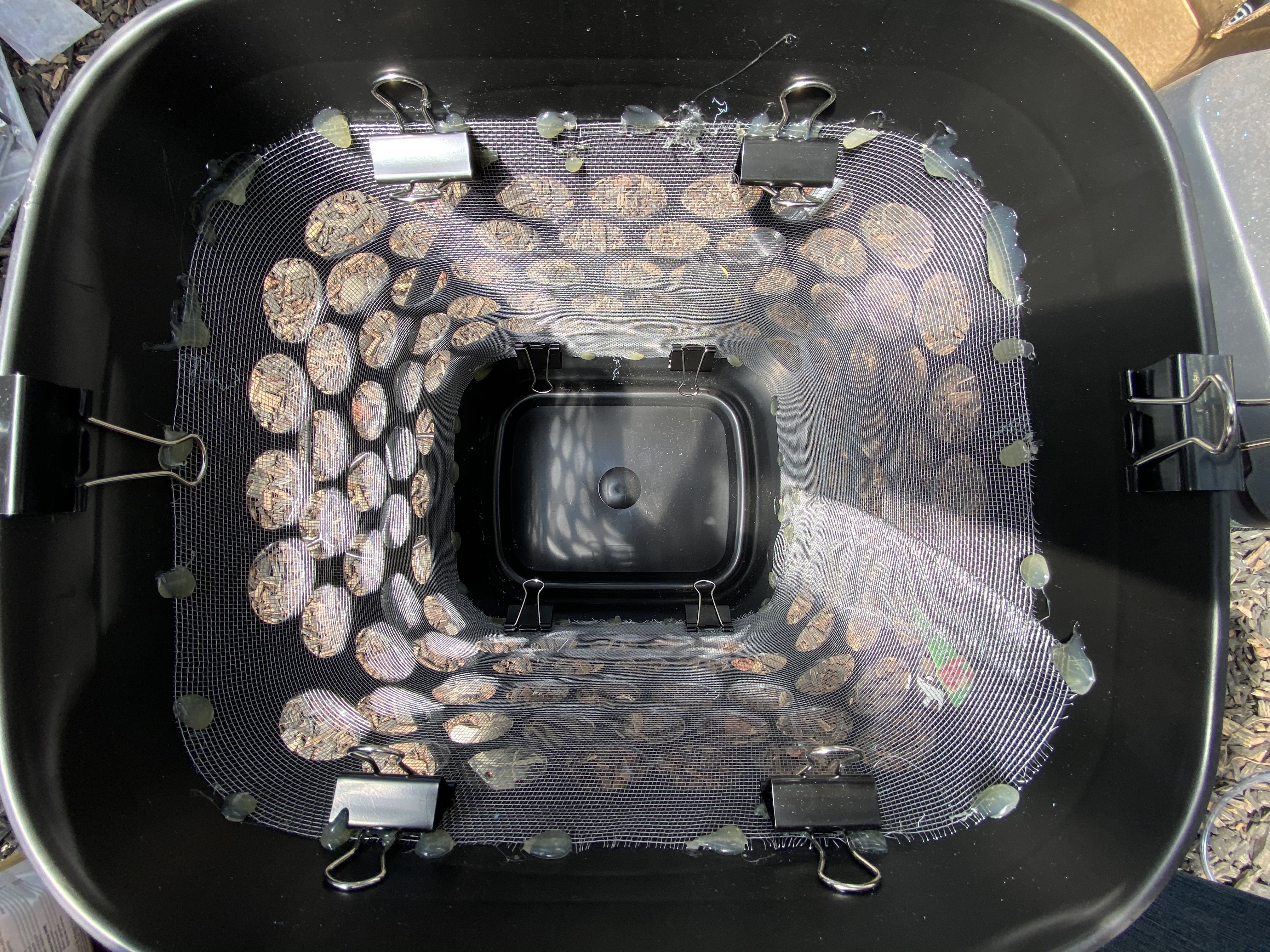 Next step was to glue in the clips. I used 1” binder clips for this but obviously a lot of different mechanisms would work. I’m not sure how they’ll hold up over time; guess I’ll update here if/when they fail.

For a fan, I decided to go with a muffin fan. I reasoned, I could make a simple gasket and make a really good seal with the lid of the bucket, and I can power a muffin fan in different ways. They’re available in almost any size and flow rate that you might want. I chose a low-noise 120mm muffin fan, drilled some 4mm holes for it, and mounted it flush to the bucket lid. 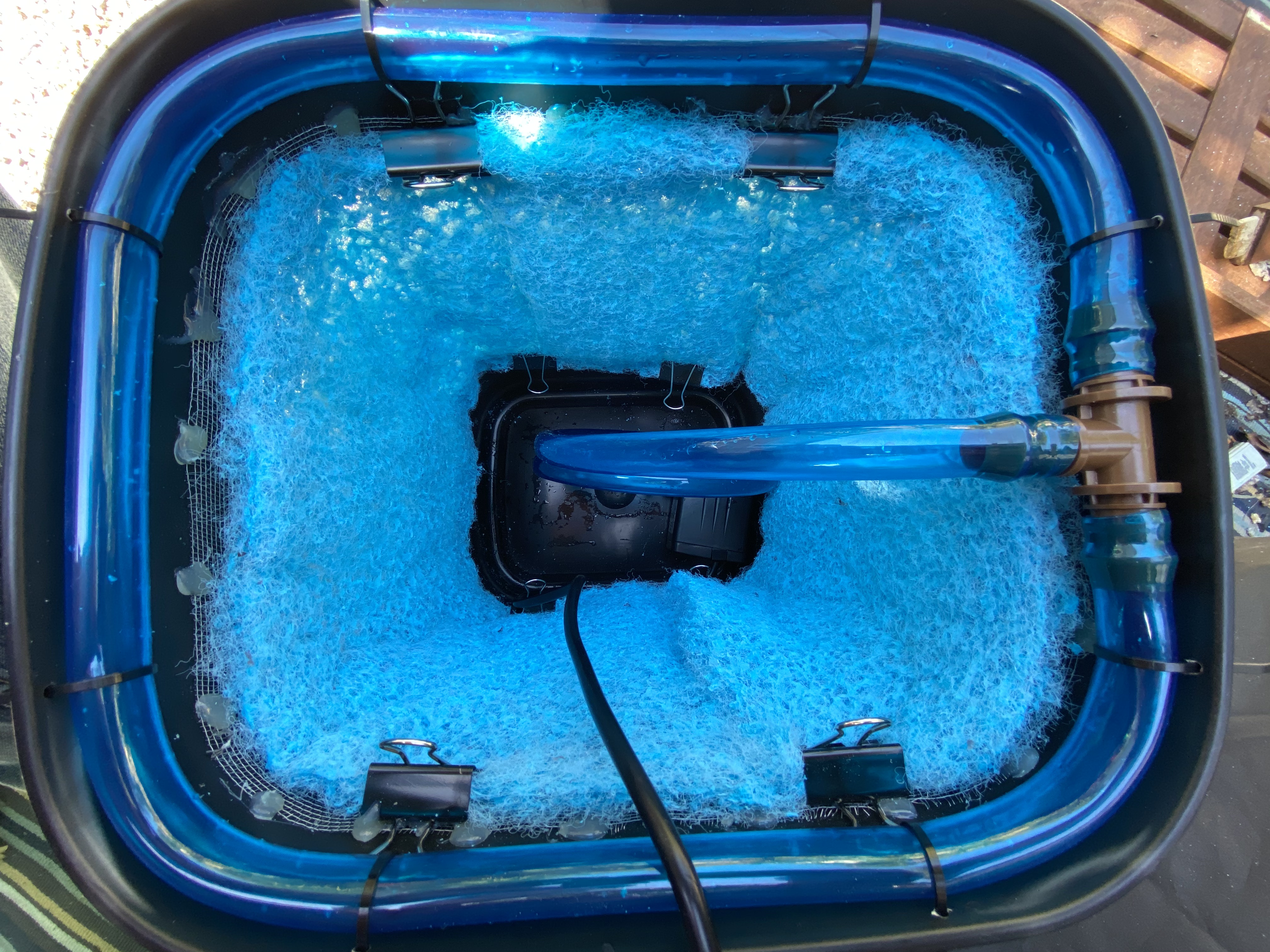 The plumbing was very similar to Swamp Thing, except I was much more careful drilling holes in it. I still drilled some wrong and they spray out at weird angles. I will probably add a blow-off like the first one because having some control over the flow without needing to buy another pump sounds pretty good.

The final thing is pretty good-looking for a food-safe plastic bucket with a bunch of holes drilled in it. On a reasonably hot day when the temperature inside the greenhouse was 105F and relative humidity 22%, I was able to cool the air coming out of the swamp cooler to 84F and 49% humidity. Not bad. I have a feeling on a hotter, drier day like when I tested Swamp Thing, it would perform even better.

Building a swamp cooler or evaporative cooler is pretty easy to do, requires very few materials that are pretty easy to get, and can be pretty effective if given a situation where it will perform well. I look forward to having a hot enough day to test it out in my office or some other room. As long as you have a pump that can run constantly for a very long time and a fan that can do the same, you’re good to go with this one.

If I were to do it again, though, I think I’d want to use a less messy cooling pad. There are a lot of different shapes of aspen pad available, though from what I can gather these can smell after a while and aren’t as reusable as the artificial one I bought. The blue dust everywhere is an issue though because it gets everywhere and I want to be able to deploy this indoors or near plants without concern.

I also think the two-bucket design got kind of short shrift in this little farce, because it’s a more robust design that will cool for longer. The mistakes I made I think were using the 3” hole saw and making holes all the way down to the bottom. In my defense, both those decisions were motivated by the fact that I was reusing a bucket from a now-defunct hydroponics system that already had two 3” holes way down low. Without a place for water to collect in the bottom of the top bucket, though, water flowed out onto the lid of the lower bucket. That’s okay as long as the bucket is level, but if it isn’t it could lead to the pump just pumping water right onto the ground. I also had used aquarium sealant to bond the bottom of the top bucket to the lid of the bottom one, which made this problem worse because the water that escaped couldn’t drain the way it was supposed to.

In a couple of days it’ll be hot enough here to test out Son of Swamp Thing indoors and I’m excited to do that. I will update here with more tests.

It kind of works! I put the swamp cooler in my office, which was swelteringly hot (didn’t have a thermometer in there unfortunately so don’t have hard data on this). The air coming out of the swamp cooler was very cold, and it did succeed in cooling down my office noticeably on a very hot day. In order to accomplish this, though, I had to:

I still think this is a good idea that’s capable of being iterated upon to a working, efficient state. As a learning exercise to learn some about the dynamics of a swamp cooler and how to design them at various sizes, I would say it’s a huge success. I think it’s possible to use a smaller pump or better yet a small DC pump I can control automatically, and it’s definitely possible to seal up the aerodynamics of it a lot, so I have a lot of improvements that I can try out.